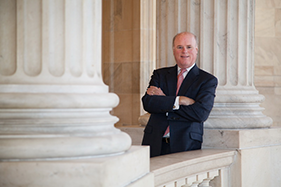 Scott began his career on Capitol Hill, where he worked for Senator Warren B. Rudman, who is recognized for his leadership on fiscal and budgetary issues.   Following his service on the Hill, Scott was the lead government relations strategist for two leading national automotive trade associations.  Scott has been a leader in the development of transportation policy that spans over 30 years.

Scott has been at the forefront of the debate on efforts by the government to promote clean energy. He is credited with developing the successful strategy to secure tax credits to promote the use of alternative fuels in the transportation sector.

Scott is a seasoned veteran in Washington’s political circles.  While working on his thesis for his master’s degree, Scott volunteered in 1980 for the Howard Baker presidential campaign in New Hampshire and was on the campaign trail with him until his last presidential campaign event in Peoria, Illinois.  Since then, he has worked on several presidential campaigns, as well as at several RNC conventions.   In the Ronald Reagan Administration, Scott worked with the Office of Presidential Advance in the White House to advance President Reagan’s public policy goals.   Scott served as the President’s personal representative on the Presidential advance teams for domestic trips, as well numerous international trips such as G-8 Economic Summits and US-Soviet Summits.

Scott was honored to be selected to help plan and execute the funeral arrangements for President Reagan at the Reagan Presidential Library in Simi Valley, California.

PACE was founded in 1991 when two individuals, a Democrat and a Republican, decided to collaborate on a joint project. They shared a common goal – the best possible representation for their client- and their different ideologies served to strengthen and expand the possibilities for that client. What evolved was a commitment to offering a service of the highest integrity. More

View all Policy Areas
PACE does not believe in a "one size ﬁts all" mentality. The principals at PACE pride themselves on their modern thought with traditional "roll up your sleeves" hard work.